“Whiskey 291” is not the latest blend from Makers Mark, the “Junkyard” is not full of old GM X-cars and “COD” is not collect on delivery.  You learn these and other lexicons when you spend 24 hours on a Nimitz class aircraft carrier.  You also learn what the Navy’s greatest asset is (hint, it’s perishable) and perhaps the most serious threat to that asset.

I just had the privilege of being one of 15 writers, bloggers and social media executives selected to participate in the Navy’s Distinguished Visitor Program and spend 24 hours on the USS Carl Vinson CVN70, a Nimitz Class aircraft carrier.  We boarded a Navy C2 COD (Carrier Onboard Delivery) Greyhound turboprop at North Island Naval Air Station, Coronado and flew 150 miles out to sea southwest of San Diego where we did a tail hook landing (“Trap” in navy parlance) on the carrier, operating in a 100,000 square mile area known as Whiskey 291.

That landing inducted us into an exclusive group, exclusive enough that the Navy gave us a patch (the Navy loves patches, all kinds of patches), a “Trap 1” to mark the occasion.  We were nothing but fluid filled bio-cargo safely secured into our rear facing and well worn seats by our 3 point harnesses, but it’s enough to give us all some serious cred back at the cube farm and the local bar.

Landing on an aircraft carrier, even via a twin 8 blade prop plane, is a jarring, unnerving experience.  Touching down at 105 mph (vs.150 mph for an F18 SuperHornet), one of the 4 arresting cables caught our tail hook and stopped us completely in 2 seconds.  It felt as if a few of your lesser organs are compressed, rearranged and your belly button shifted.  Thus began a 24 hour adventure that would add an extra quart of testosterone to each of our bodies, regardless of gender.

The plane taxied even as the wings were folding up and the rear ramp, our egress and exit, opened to flood our noisy, dim cocoon with brilliant light, roaring jet engine noise that vibrated our teeth and the fresh ocean breeze.  Big guys with big helmets, big goggles and big ear phones guided us out and over the deck to a catwalk hanging 70 feet above the fast moving ocean and then back into a quiet, calm sanctuary holding strong hot coffee, cool water and fresh baked cookies, the Captain’s stateroom.  “Welcome, please come in and take off your Cranials and lifejackets” were the first words from the Master Chief Petty Officer.  Cranial is of course the helmet but I felt like my real cranial was still foggy from the landing.

We were briefed by the Executive Officer and the Captain on how our next 24 hours would unfold (awesome, thanks for asking) before we posed for the obligatory but genuinely smiling group photo (providing evidence we did arrive safely) and then started our day but where else, the flight deck yards away from landing F18 SuperHornets.  But of course.

We stood there, cameras clicking, smiles widening and bones vibrating as $67,000,000 state of the science, 51,000 pound jets landed and catapulted off the 4.5 acre deck, far closer than I would have expected but still, there was a magic line and none of us dared cross it. We were just on the stern side of the “Junkyard” where a few SeaHawk helicopters, an AWACs plane and some forklift like machines were parked.  Our plane had landed less than 30 minutes prior and we already had sustenance, assurance and recognition and were closer to live carrier flight operations than 99.99% of people on the entire planet ever get…and we had more, much more coming. 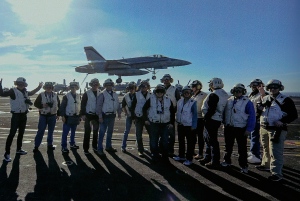 As stated, we are all writers, bloggers and social media types to say nothing of being very tech savvy.  Naturally, we were mesmerized by the technology, much of it in operation all day and much of our restless night.  Advanced communications, radar, navigation, billions of dollars of equipment, a 100,000 ton, 1,100 foot nuclear powered ocean going Borg-city moving far faster than the official 34 knots through the water (you can’t fool me), water desalination, etc., all it of was very cool and we were suitably impressed.  But…the real asset of the carrier and ultimately the most impressive to us was the crew, men and women, officers and enlisted, young and, well, younger still than me.

Nothing, absolutely nothing works without the crew and everything does, like clockwork, with the crew.  You may rightly feel that you work hard, long hours.  Perhaps you do, especially if you work for a startup.  You know the feeling of a 12-14 hour day 5 or even 6 days a week.  Sure, the money is good and there is a potential payoff at the end of your startup if it goes IPO or better yet, quickly gobbled up by Google.  You know this even as you check Facebook 20 times a day and email and text your friends while you are eating pizza and drinking the local brew beer at 7:30 PM while working on that media campaign or coding some game changes.

But do you know what it is like to work 16-18 hours a day, 6 or sometimes 7 days a week, have but 15 minutes of internet access a day (maybe), no cell coverage, no long term payout, work for below market rates, sleep in bunks stacked 3 high with but a curtain for privacy and oh, let’s just toss in that you will often be away from your loved ones for 8, 9 or even now, maybe 10 months?  As I thought, so stop whining.

This is not an exaggeration, these are the working conditions of the men and women on the carrier.  They work, work and work some more so that you and I can pat ourselves on the back and think we are cool because of our jobs or where we live.  Ah, freedom!

Keep in mind, not only the Navy but the entire US Military, the most powerful and dominant the world has ever seen, is all-volunteer.  So, not a problem working like this, they volunteered, right?  Well, there is.

Life in the Navy was never easy, it was always hard work but it was reasonable and offered, and still does, many tangible and intangible rewards not the least of which is doing something for your country on a grand scale.  But the issue is that the Navy is being asked to do more and more because Congress allocates less and less.  I noticed empty billets (bunks, sorry, I have the lexicon down now) and people are doing more, more with less so to speak.  Deployments lengths are creeping up as we have gone from a 11 carrier navy to a 10 carrier navy in what many believe is actually a 15 carrier world.  Deployments lengths go up, the number of personnel goes down, what do you have?  You have an extremely capable, professional, focused, dedicated and patriotic crew that works harder and longer and does not see their loved ones for longer and longer periods of time.  That is as you should surmise, assuming your IQ is over 80 and your common sense is in tact, not good, not good at all. 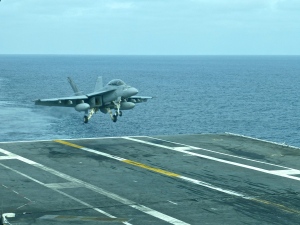 I’m not interested in having a military budget and procurement conversation, I’ll leave that to those perpetual pork-seeking politicians.  But…whatever is the right level of budget for the navy needs to match the mission at hand. One highly educated, thoughtful and very senior officer who’s name I will not reveal (ask NSA if you want a transcript of the conversation), in response to a question of budget cuts and their effects, stated “…the trick is to get that right balance.  It may be just as bad to give the military too much money as it is not enough”.  Well said, true and revealing in it’s honesty and simplicity.  If you reduce the budget and reduce the manpower, then reduce the mission.  I know common sense is not a characteristic of Congress, but it is simple enough even for them to understand the concept.  Forget national security for the moment…no, no, I can’t.  Fine.  Don’t forget national security but focus on the proper matching of resources and mission.  If national security depends on X number of carriers, budget that and the resources to operate and never forget, the most important resource is the crew, those young men and women who sacrifice daily for the rest of us.

One thought on “IT WAS AWESOME² BUT…ARE WE ASKING TOO MUCH OF THE US NAVY?”